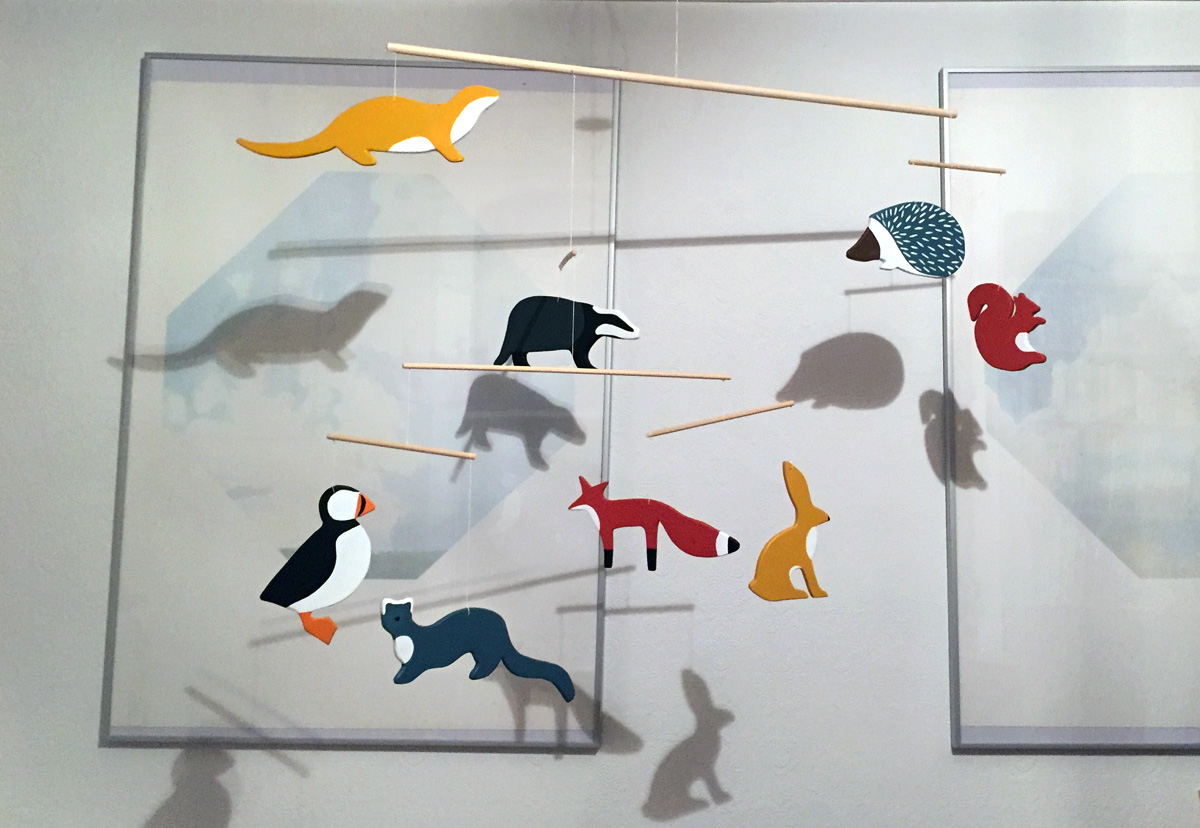 Most presents for babies could more truthfully be described as presents for parents. It’s difficult to get a newborn interested in anything more detailed than a black jumper. We’ve been gratified, though, to see how early babies will respond to gently rotating shapes. Helene's five-week-old niece was hugely absorbed by her sea-themed mobile. Difficult to be certain she truly liked it; the smiles didn't arrive for another few weeks.

Most of our mobiles have been for new people we know, but recently we’ve taken a few commissions on interesting themes. 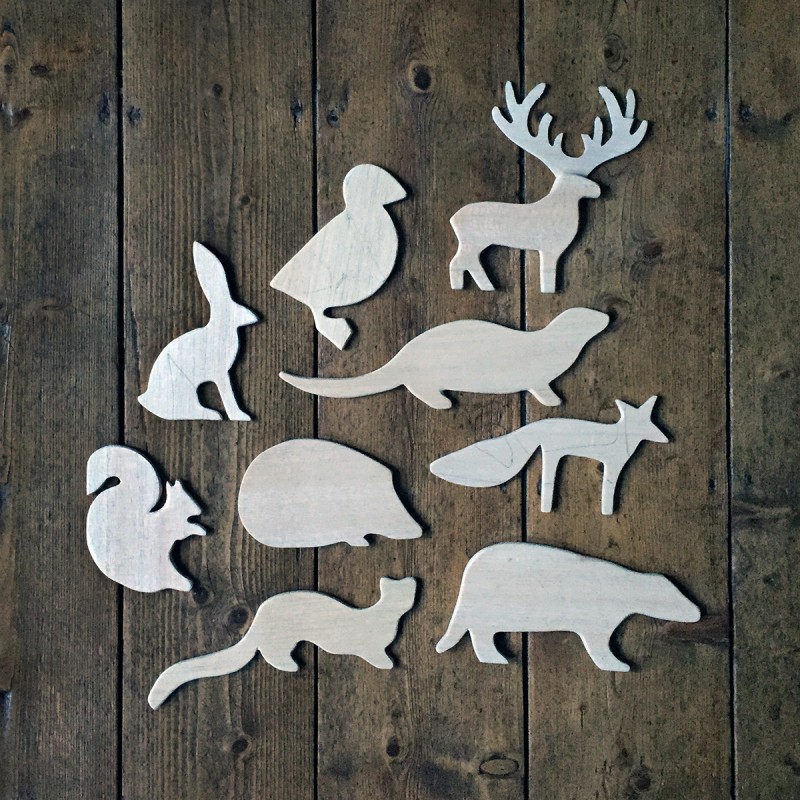 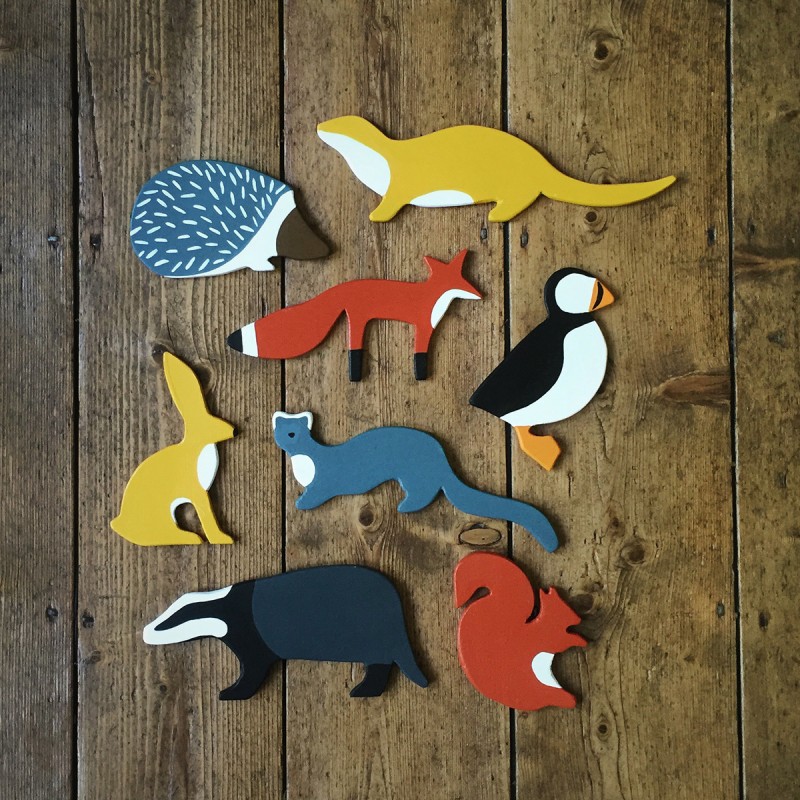 We were asked to build a mobile of native Irish animals. The final assemblage was larger than we anticipated, but moved very well in the front room drafts. 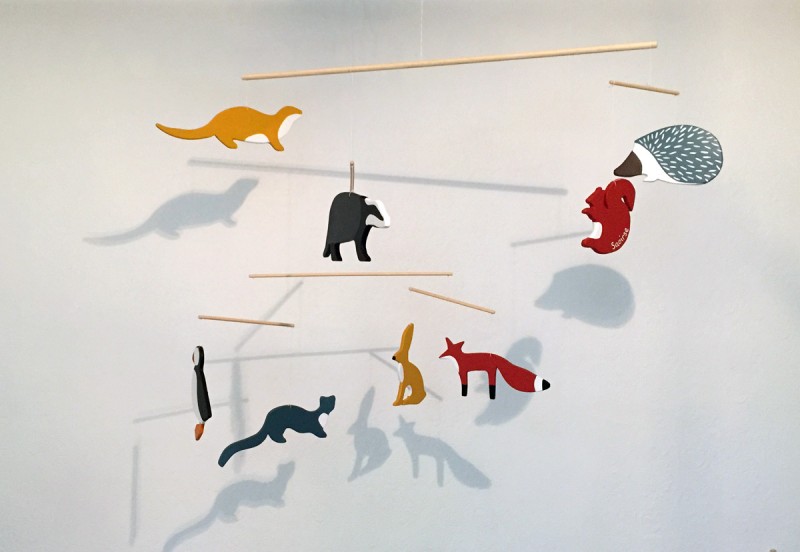 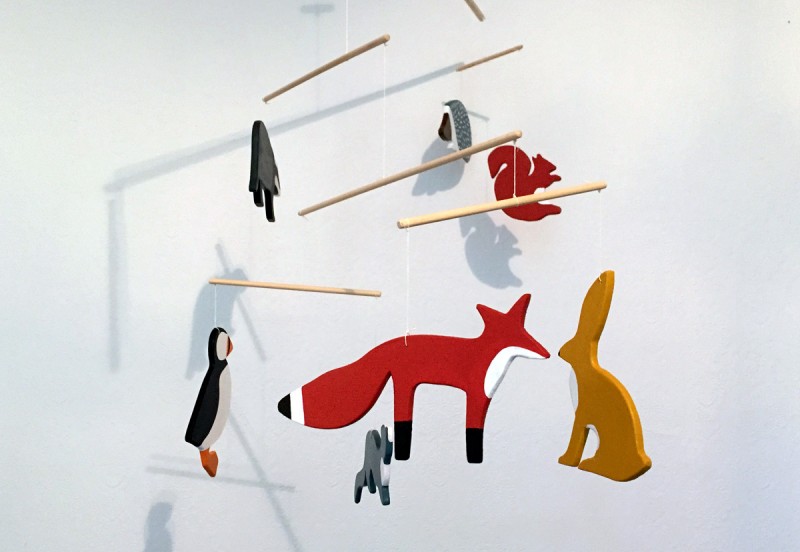 Wanting to cut more elaborate shapes than earlier mobiles, we began experimenting with balsa wood and bookbinding string. The shapes were loosely drawn by Helene on planks of balsa—freehand for irregular shapes, french curves for boats—then cut with a piercing saw and sanded. 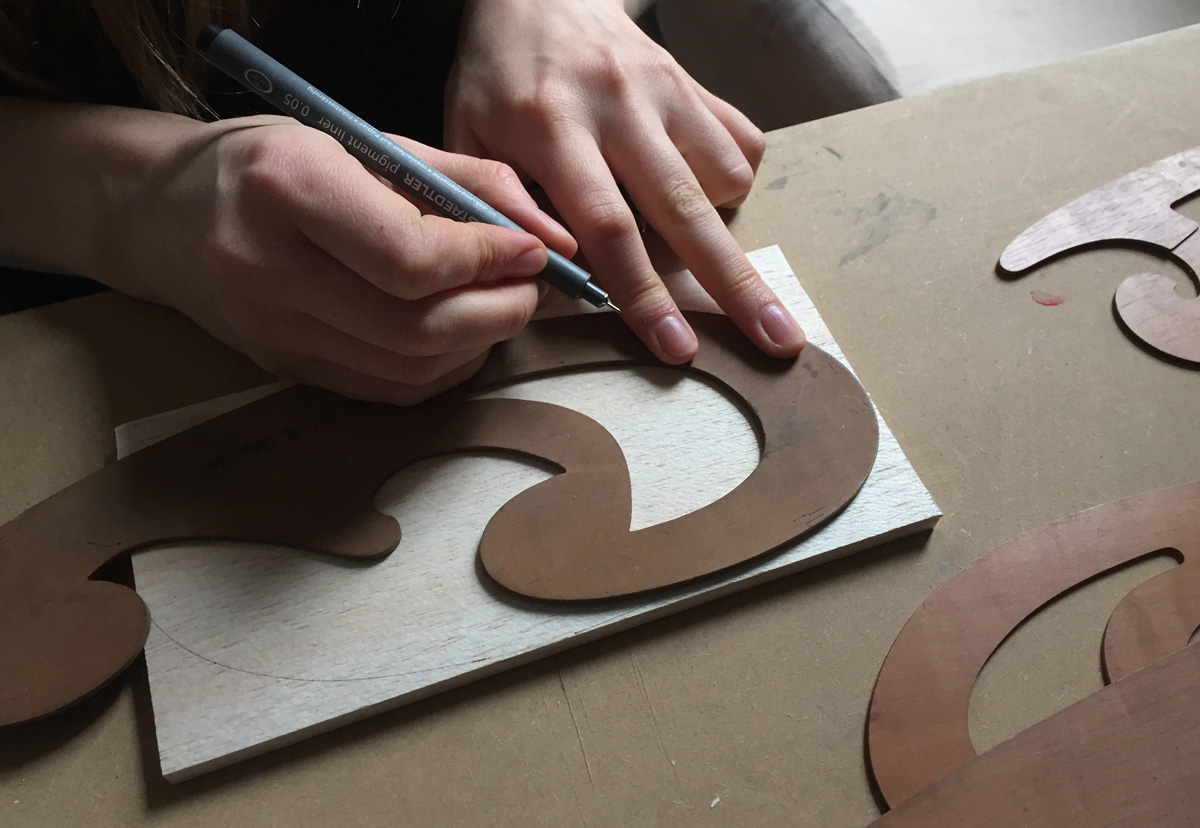 Balsa wood is incredibly light, and once suspended spins in the softest of air currents. The wood is fragile, but becomes reasonably sturdy once a layer of paint is applied. 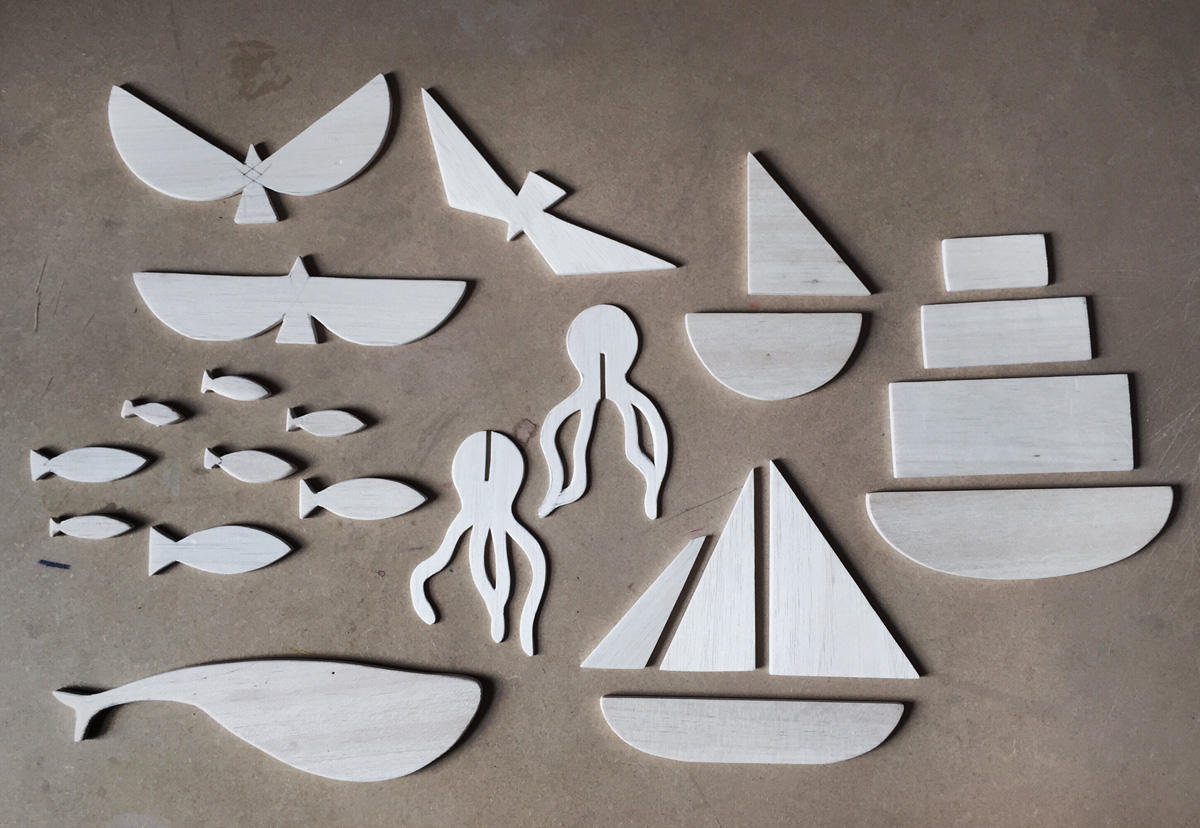 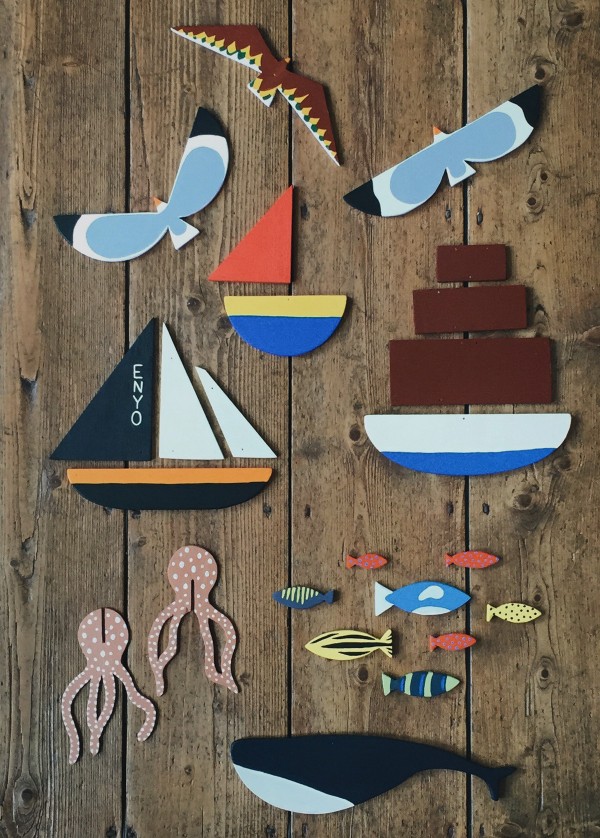 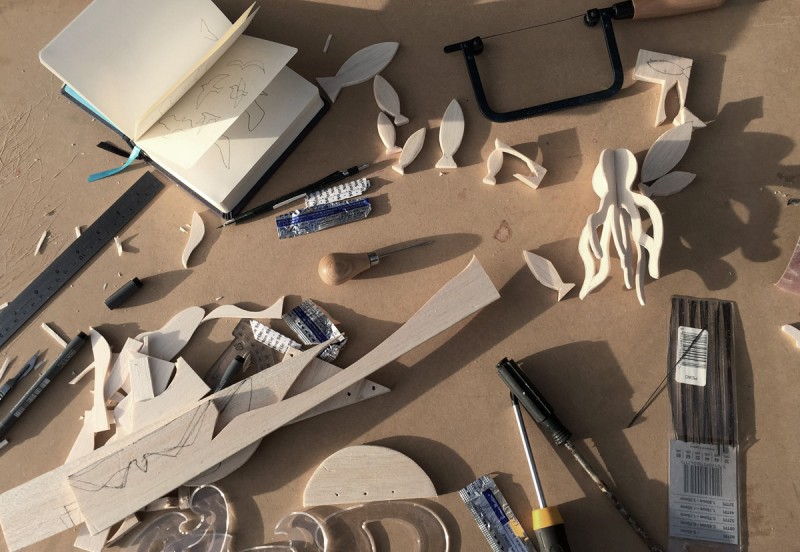 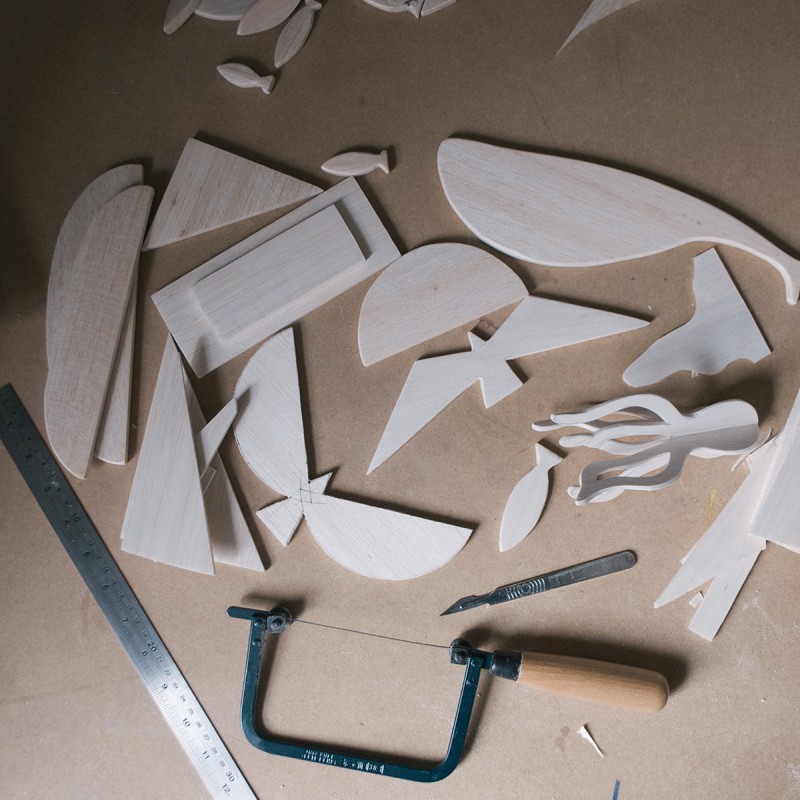 A nautical mobile was the only possibility for Helene's niece, who lives on a boat. I'm not sure whether there are whales in the Ĳsselmeer, but who's to say for sure? 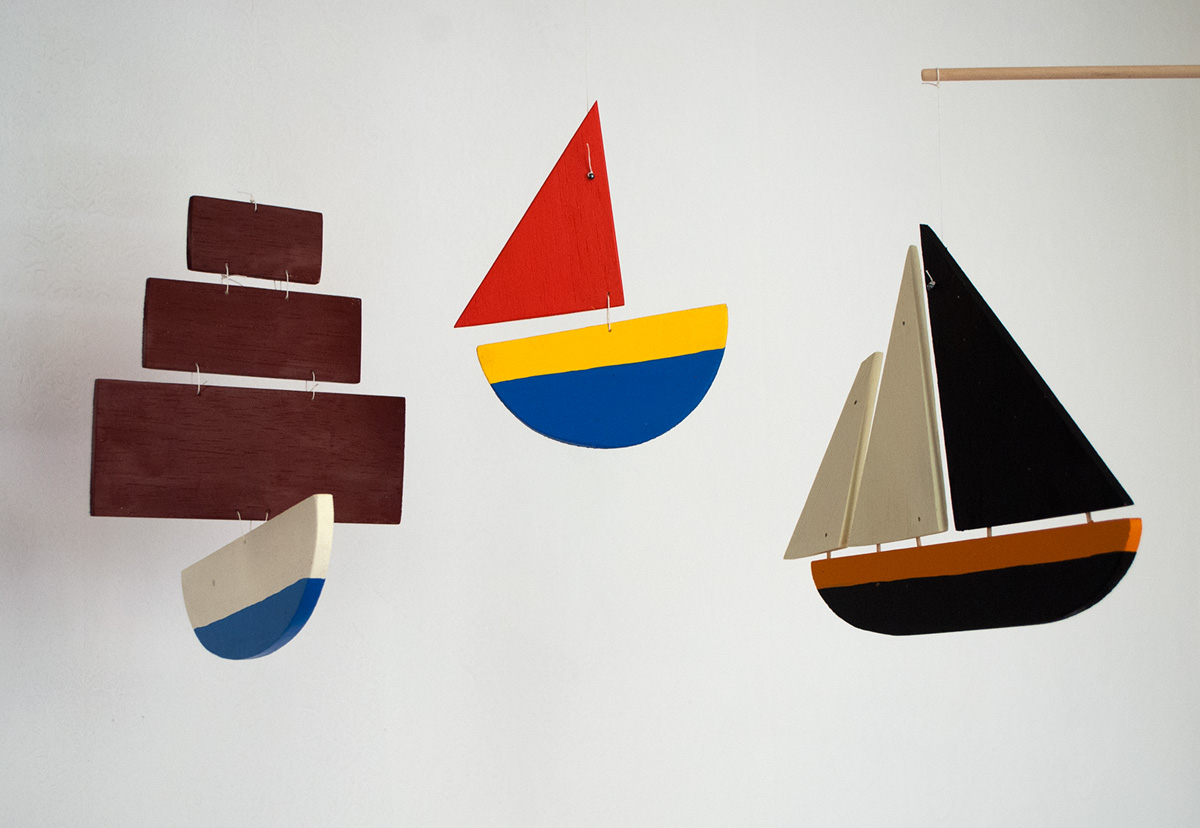 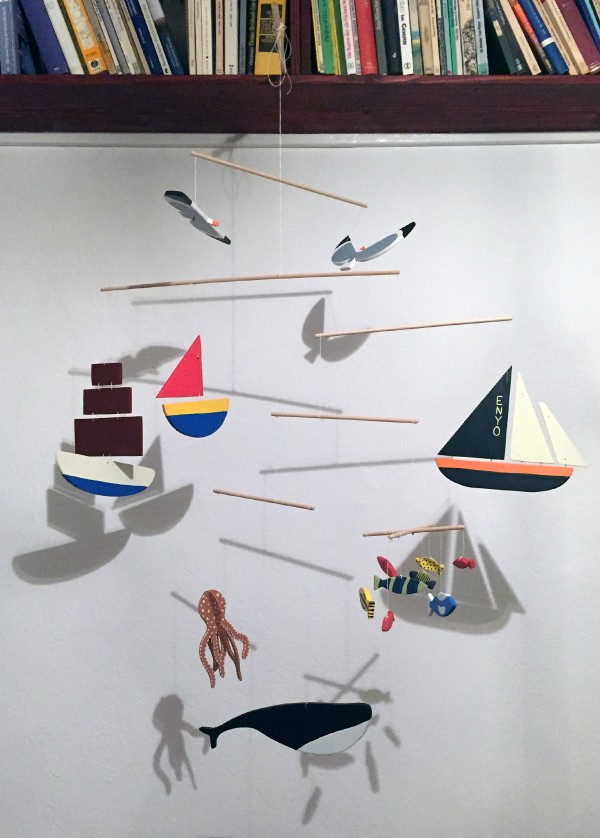 In 2014 we moved to Madrid for half a year, staying with my sister Damhnait and her husband Matt in an apartment in the city centre. At the Reina Sofia—Madrid’s wonderful 20th-century art museum—Helene introduced me to the mobiles of Alexander Calder. His enormous iron sculpture Carmen stands at the centre of the courtyard, but the smaller hanging mobiles upstairs show most clearly the original of the form.

Later in the summer I found a retrospective catalogue of Alexander Calder’s work as a gift for Helene’s birthday. My sister was expecting in late July, and we planned a mobile for the baby’s arrival.  Helene’s birthday arrived the day after my new niece’s one, and I gave her the book on the morning we set to constructing the mobile. 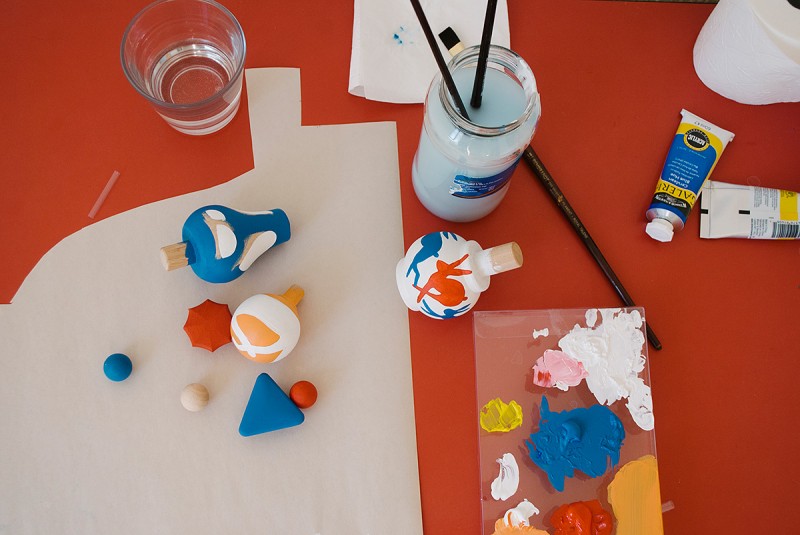 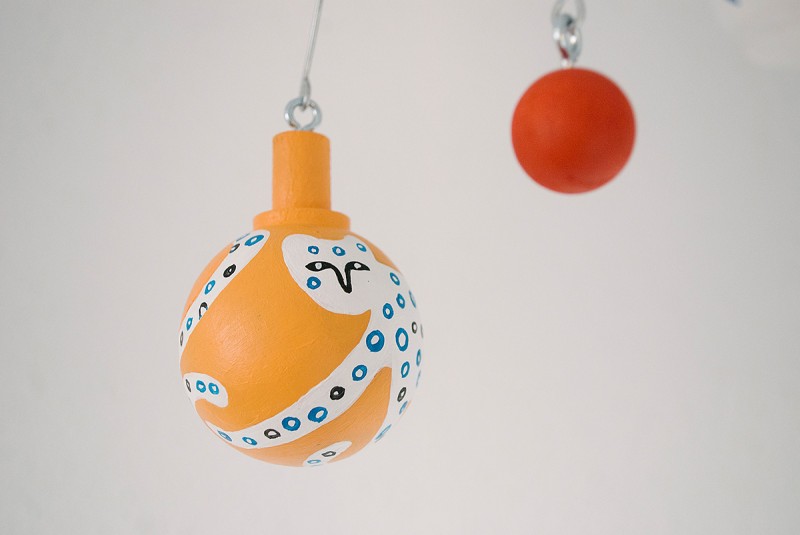 We wanted to try a different balance for this mobile, so we studied the book and learned from Calder’s hanging mobiles, where the support components are not divided into rigid and loose (like wood and string) but are made of the same material – usually a light, flexible wire. We bought the parts for the hanging components on Calle Madera in Madrid, where there are many carpenters and shops selling wooden parts. Using fragmented Spanish (pequeñas, madera, un móvil, para un bebé) and gestures, we were directed towards drawers full of untreated doorknobs of various shapes and sizes, wooden balls and rings. We got to work when Damh went into labour, painting and constructing the mobile, and got it hanging just in time for their return. 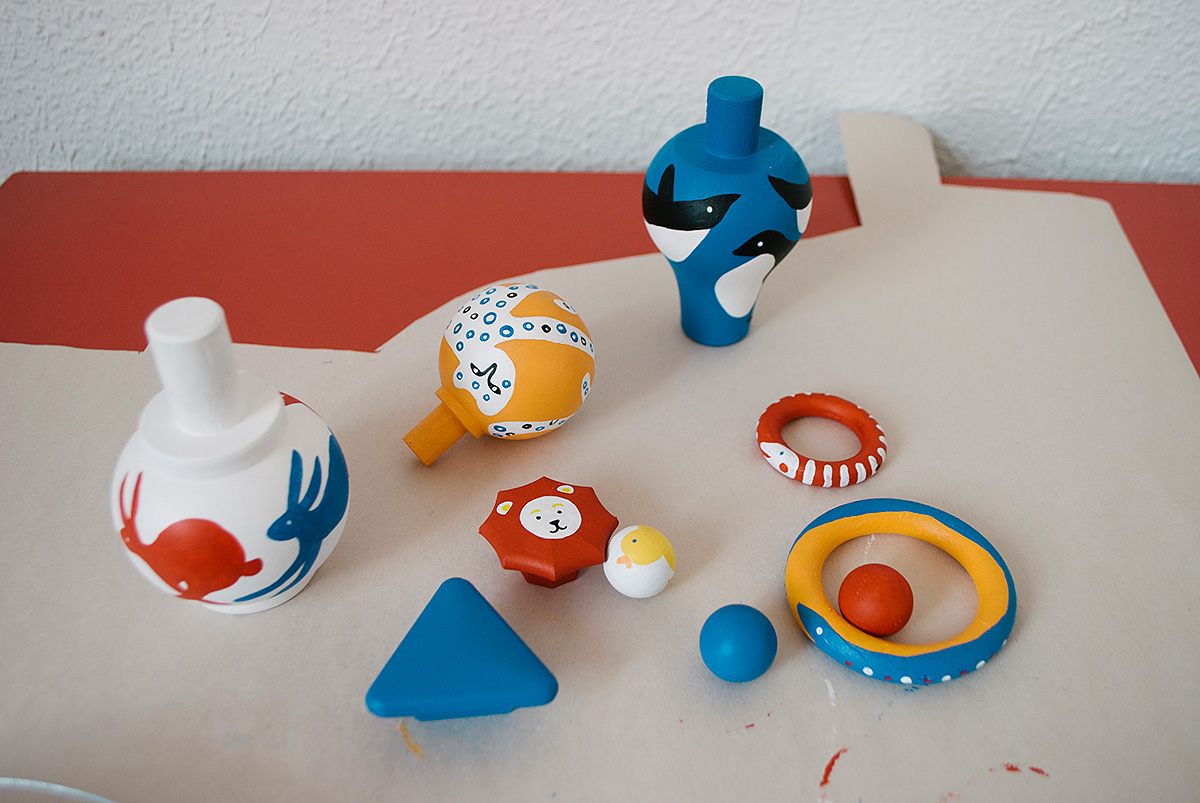 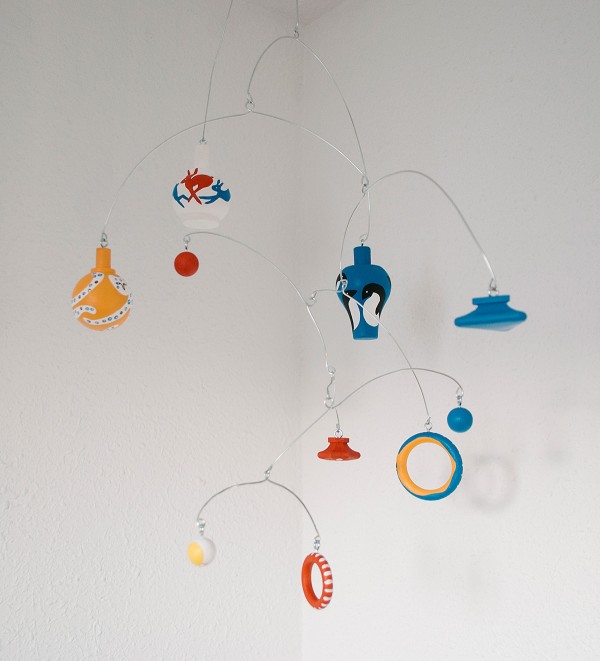 Our first mobile was requested by our friends for their first baby, A. It was made with hard cardboard, cotton string, and willow branches. It featured a rhino, snail, camel, snake, bird, sheep, zebra, lion, seal, elephant and a tall giraffe. We built the mobile from the bottom upwards, balancing the parts on the sides of each branch and finding the centre of gravity for the next section. We etched a small niche in the branches for extra stability. 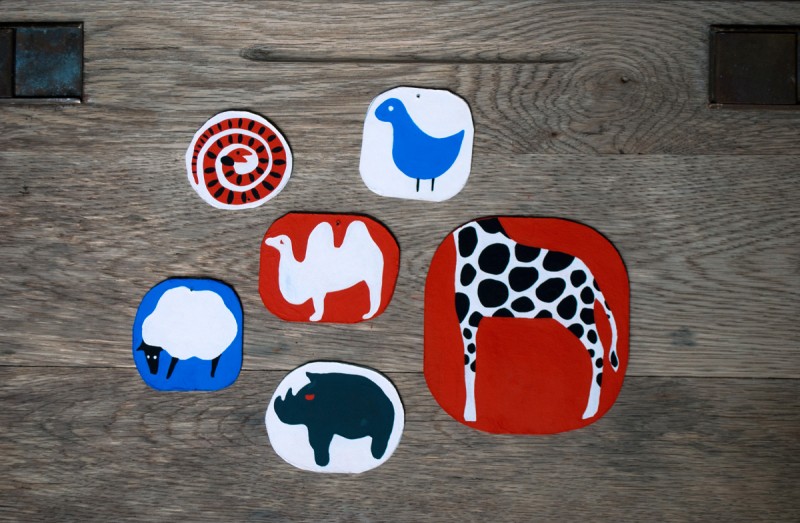 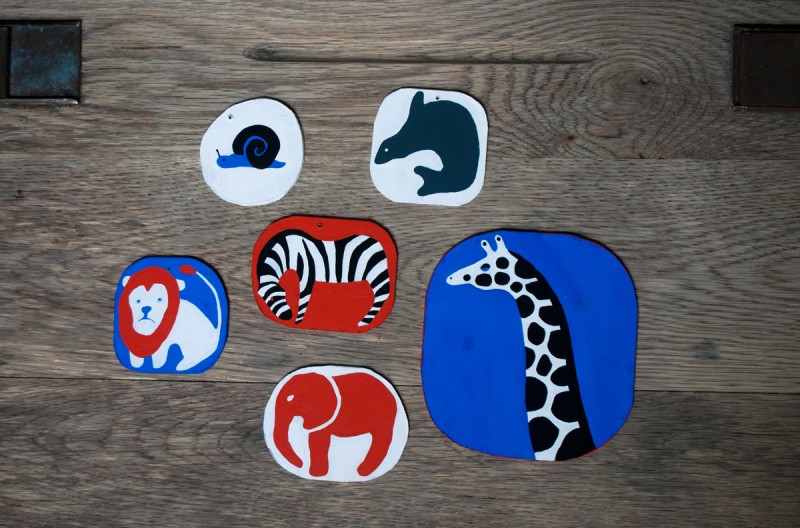 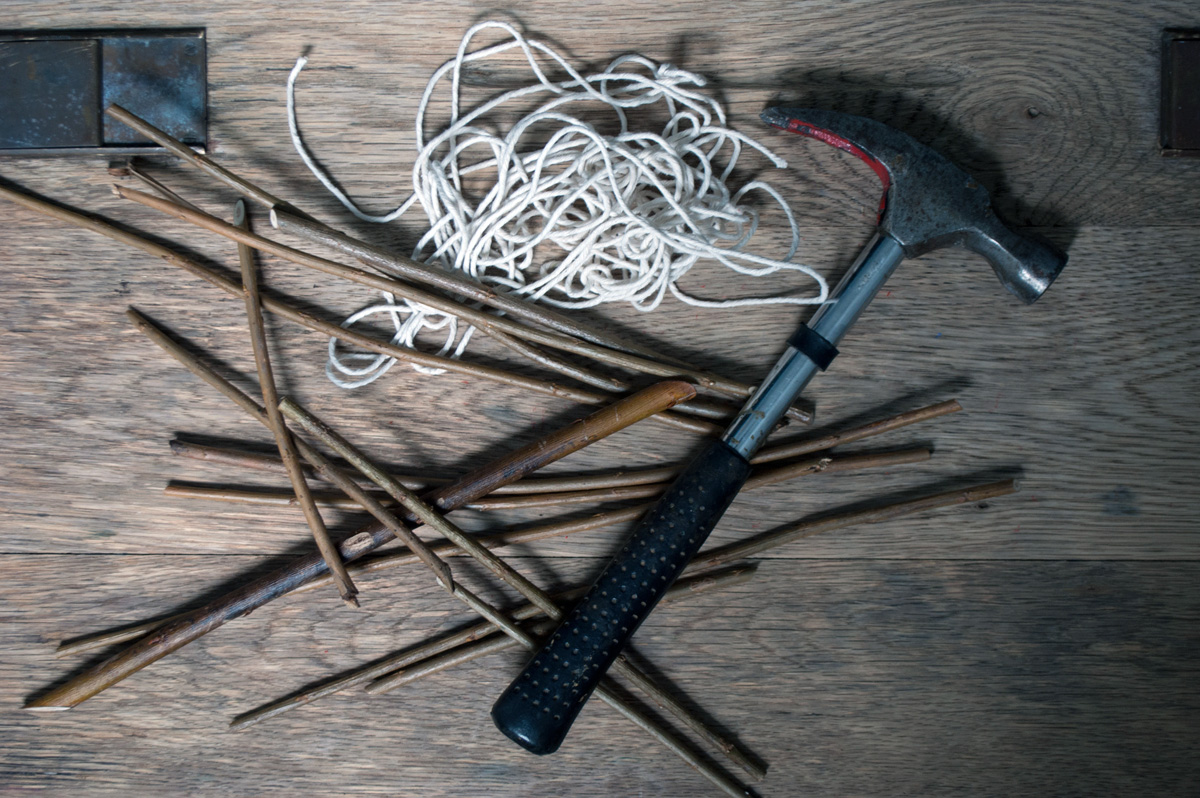 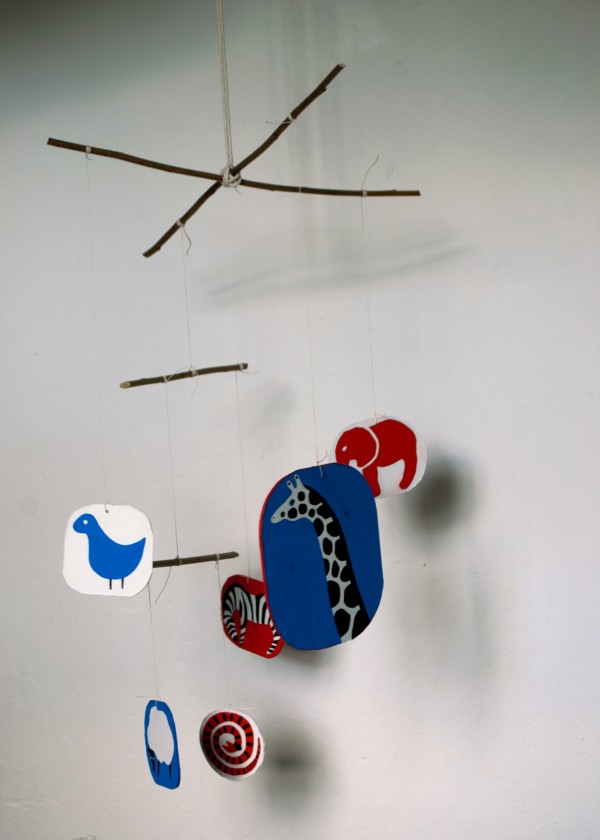 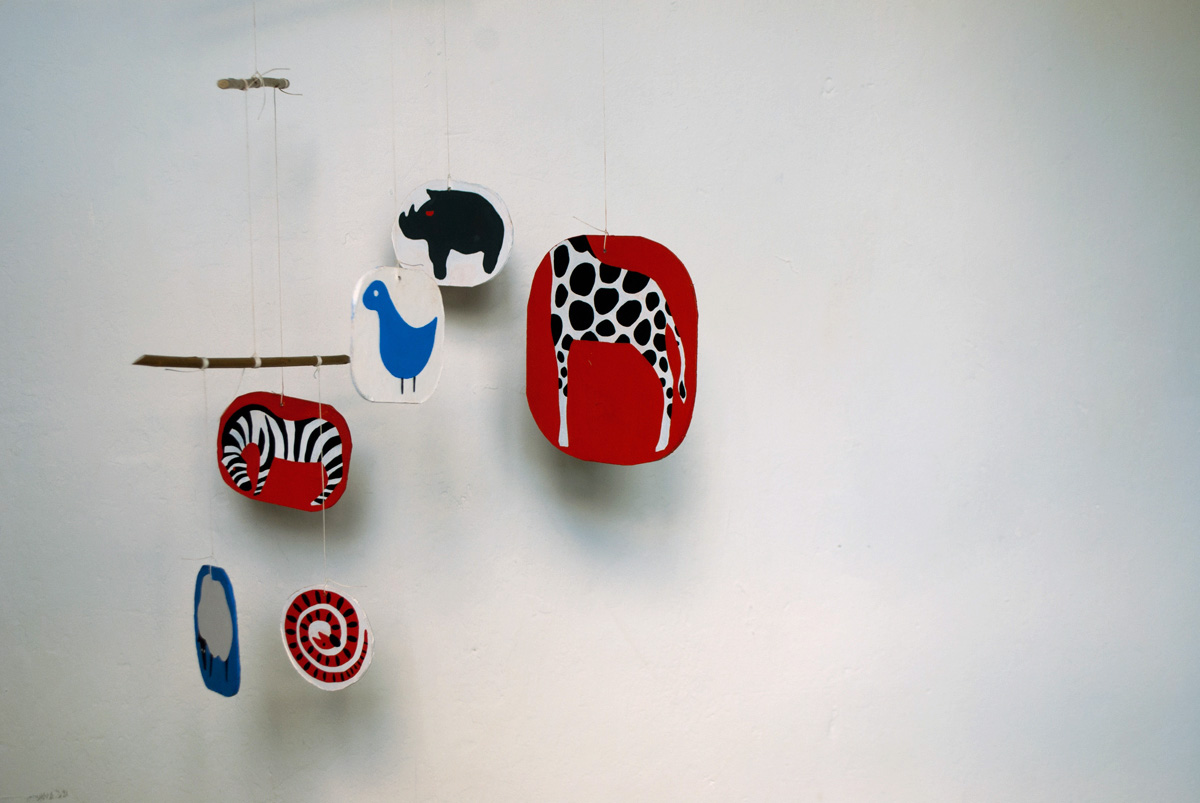